A TURTLE RESCUED from a Queensland port earlier this month with both hawksbill and green turtle features is suspected to be the first hybrid of its kind in Australia.

The unusual turtle was rescued by concerned onlookers and taken to Reef HQ Aquarium’s turtle hospital on the Great Barrier Reef after it was seen lingering in the Townsville Port following entanglement in a crab pot.

Two fishing hooks lodged in its mouth were extracted before it was sent to James Cook University’s veterinary school for X-rays to assess possible internal injuries.

With the all-clear, the turtle was returned to Reef HQ for some rest and rehabilitation – and its unusual appearance soon sparked interest in the scientific community. 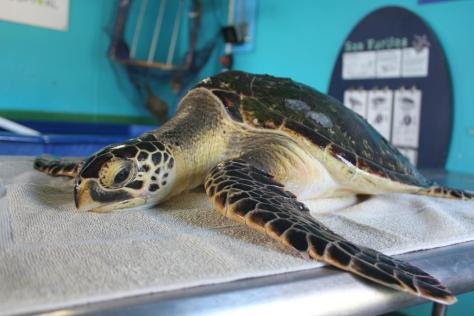 The turtle appears to have traits of both the hawksbill and green turtle. (Image: Reef HQ Great Barrier Reef Aquarium)

“This turtle is quite unique looking and it certainly isn’t like any of the others we’ve had come into the turtle hospital over the 27-odd years that we’ve been open,” said Hamish Tristram, a senior aquarist at Reef HQ.

Using an identification key to determine its species, the team at Reef HQ found several features that were not consistent with either a hawksbill or green turtle, instead Summer – as the turtle was affectionately named, after Hamish’s daughter – appeared to have traits of both.

“The post-ocular scales that go behind the eyes – generally the green turtle has four and the hawksbill has three,” explained Hamish. “This particular animal has three on one side and four on the other so it has an intermediate (trait) or has features of both.”

Hamish says the animals’ scutes (the large scales on the back of its shell) appear to overlap and the lower scutes have serrated edges, which are traits of the hawksbill, but its single-clawed flippers and paired rostral scales are features of the green turtle. 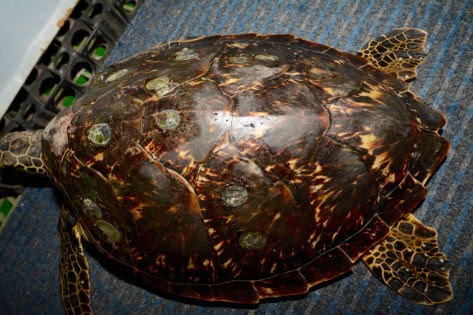 The large scales (called scutes) on Summer’s shell (above) appear to overlap, and the lower scutes have serrated edges; traits of the hawksbill turtle, such as Shelly, pictured below. (Image: Reef HQ Great Barrier Reef Aquarium) 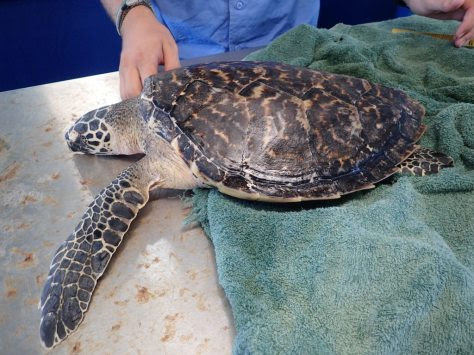 Summer’s hybrid status has not yet been confirmed, but genetic testing and a laparoscopy will be undertaken to verify the turtle’s heritage and determine whether or not it is a viable animal (able to breed).

“We’re very excited about what that might reveal,” said Hamish. “It is a very rare opportunity to have an animal like this to have those tests done.”

If it is indeed a hybrid hawksbill-green turtle, Mark Harmann, an associate professor of marine biology at James Cook University, says it will be the first recorded in Australian waters. However, he added, “that’s not to say it wouldn’t have happened before.” 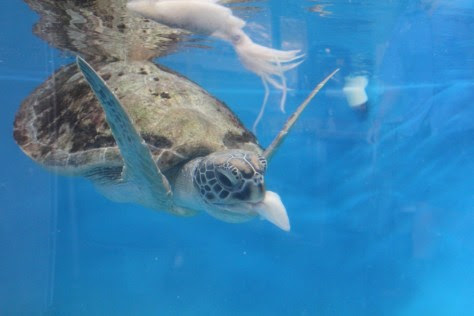 Mark said cases have been recorded in East Africa and Southern and Central America, and it comes down to people recognising the difference and reporting it.

Until the necessary testing has been conducted, Summer will be kept at the hospital and used for educational purposes, and with her recovery on track Hamish said she will then be released back to her natural environment.

“I’m glad to say that we’re very confident of her going back to the wild,” he said, adding, “She will certainly be a success story and if we can get a bit more knowledge from her whilst we’ve got her then it’s a win-win for everyone.”